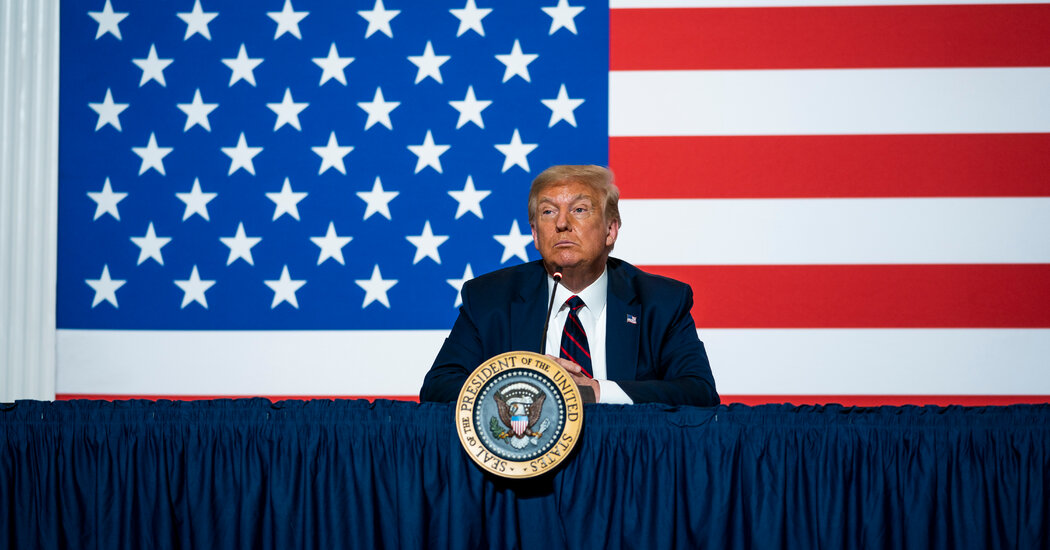 The president is showing little urgency or strategy as the economic recovery stalls ahead of the November election.

WASHINGTON — The United States just suffered its worst economic quarter in nearly 75 years. Its recovery from the depths of a pandemic-induced recession has stalled, as coronavirus deaths rise again across the country. President Trump has what appears to be one final chance to cut a deal with Congress to ensure hard-hit workers and businesses do not collapse before the November election.

He has shown little interest in taking it.

Rather than push for a comprehensive plan that could win support from both Democrats and Republicans, Mr. Trump has instead embraced big-ticket items that Senate Republicans did not want and that would do little to help millions of struggling workers and businesses.

That included a payroll tax cut and an expanded tax break for business lunches, along with $1.75 billion to rebuild the F.B.I.’s headquarters in Washington. He has derided efforts to find middle ground with Democratic leaders on a broad economic rescue package, declaring on Wednesday that “we really don’t care” about several possible parts of it.

Mr. Trump and his aides waited until the 11th hour to engage Democrats over expiring unemployment benefits that have been a lifeline to millions of workers, and Democratic leaders have dismissed his last-minute proposal to temporarily extend them. Over the past week, the president has publicly called for stimulus measures that were not included in the $1 trillion proposal that his administration and Senate Republicans unveiled on Monday, like continuing a national moratorium on evictions.

The president’s approach to the negotiations over another round of federal stimulus for the ailing economy has confounded economists, lobbyists and lawmakers, who say they are baffled by Mr. Trump’s apparent lack of urgency to nail down another rescue package that he can sign into law.

The economic rebound Mr. Trump still boasts about has stalled as virus cases reach records and states reimpose lockdowns. Labor Department data released on Thursday showed that new unemployment claims had risen for the second consecutive week, and that the number of continuing claims was also increasing. On Wednesday, the chair of the Federal Reserve, Jerome H. Powell, warned the nascent recovery that was underway in May and June was sputtering.

A wide range of polls show Mr. Trump’s lead over the presumptive Democratic presidential nominee, Joseph R. Biden Jr., on economic issues has evaporated in recent months. Congress is set to leave for recess in less than two weeks, with little prospect of major legislation remaining from then through the election.

Strategists say there is a potential compromise to be had between Democrats and the White House, most likely in the range of a $2 trillion package, before Congress decamps for its summer recess. They do not understand why Mr. Trump would decline to seize a deal and risk watching Americans lose their homes and businesses as November approaches.

The president’s strategy to help the economy “is hard to decipher,” said Michael R. Strain, an economist at the conservative American Enterprise Institute who has urged Congress to provide more aid to people, businesses and hard-hit state and local governments. “It seems to me there isn’t a clear strategy to support the economy right now coming from the White House.”

Mr. Trump, he added, “is just misreading how bad the economy is, and how hard of a shape workers and families are in right now.”

Some members of Mr. Trump’s inner circle, along with his allies in the Senate, have urged the president to oppose a large new spending bill, including some of the provisions included in the Senate Republican proposal unveiled on Monday. The economists Arthur B. Laffer and Stephen Moore, who informally advise Mr. Trump, have told him to focus on a payroll tax cut for workers and businesses — a move that few Republicans support and that economists say would do little to help the 30 million Americans without a job.

Democrats in Congress say they are surprised to find themselves in the position of pushing Mr. Trump and his party to agree to a stimulus spending plan, given how central the economy has been to his presidency and the dire straits it is facing. Democrats say the package of proposals they are insisting upon — including additional money to test for and prevent the spread of the virus, extensions of supplemental unemployment benefits and more aid to small business, states and local governments — could actually help Mr. Trump win a second term, by lifting the economy and helping control the pandemic.

But the president has remained steadfast in his belief that the virus will soon abate and continues to portray the economic slowdown as a blip. During remarks at the White House on Thursday, he said that a comeback “won’t take very long, based on everything that we’re seeing.”

Asked this week in North Carolina if he was worried about the state of the recovery, Mr. Trump replied: “I don’t think so. I think the recovery has been very strong. We’ve set record job numbers.”

Senator Ron Wyden of Oregon, the top Democrat on the Finance Committee, said the president’s rosy predictions were not going to help the millions of Americans without jobs.

“Donald Trump thought he could just happy-talk his way through the things people are talking about in their kitchens and their living rooms, which is how to beat the virus and how to fix the economy,” he said.

When the Commerce Department reported the economy contracted in the second quarter at its fastest rate since the immediate aftermath of World War II, Mr. Trump’s re-election campaign responded with a news release promoting job gains in May and June and attacking Mr. Biden over his economic record as vice president.

Outside economists are far less bullish than the president on the economy’s trajectory. Ian Shepherdson of Pantheon Macroeconomics wrote in a research note on Thursday that “we would not be at all surprised” to see little job growth or a dip in the unemployment rate for August or September, given current trends in the economy. Forecasters at TD Securities have recently cut their projections for growth in the third quarter and warned that growth for the end of the year will “depend significantly on Covid developments.”

Mr. Powell, the Fed chair, said on Wednesday that the stimulus spending approved so far had been crucial to keeping “people in their homes and businesses in business” but warned more support would be needed given “a large number of people” would struggle to regain employment in the months to come.

The delays in negotiations have already pushed the country over a benefit “cliff” — the expiration of the additional $600 a week that unemployed workers were receiving under the economic rescue package Mr. Trump signed in March expire on Friday. Many economists warn that the sudden reduction in buying power for millions of Americans will only worsen the current slowdown.

The expanded unemployment benefit is “an incredibly important part of our household consumption base in the United States right now,” said Kathryn Anne Edwards, an economist at the RAND Corporation. “It’s keeping up consumption, it’s keeping people in their homes.”

Administration officials tried on Thursday to sell Democrats on a short-term extension of those benefits, while negotiations continue on a larger deal. Democratic leaders said they wanted a longer-term agreement.

“I think he’s doing what he can,” Mr. Young added, “so that the economy can open up again.”